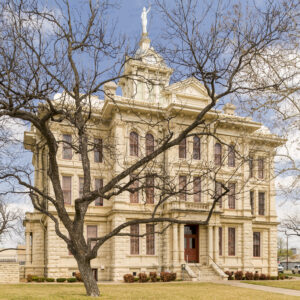 Scroll Down For All Millm County Courthouse Images

Capitolshots Photography’s collection of images of the Milam County Courthouse in Cameron, Texas.

Scroll to the bottom of the page for the gallery of Milam County Courthouse stock photos.  File names are visible at the beginning of the caption underneath each image after enlargement.

Designed by Jacob L. Larmour and A.O. Watson, the limestone Renaissance Revival courthouse, the county’s sixth, was built in 1892.  The Cameron courthouse was significantly remodeled in the 1930s, with the original clock tower being removed.

In recent years, the building was restored to its original grandeur, including a reinstallation of a clock tower, and was rededicated in 2002.  The Milam County Courthouse is listed on the National Register of Historic Places and is a Texas Historic Landmark.