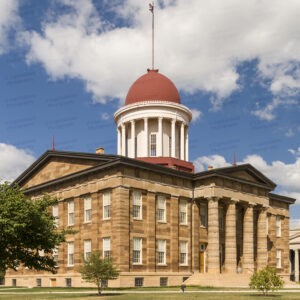 Scroll Down For All Illinois Old State Capitol Images

Scroll to the bottom of the page for the gallery of Illinois Old State Capitol stock photos.  File names are visible at the beginning of the caption underneath each image after enlargement.

Designed by John F. Rague and constructed between 1837 and 1840, the Greek Revival structure served as the capitol of Illinois from 1840 until 1876, when the current capitol building was completed.  The building then served as the Sangamon County Courthouse from 1876 through 1966, when the county retroceded the building back to the state.

The building was completely reconstructed in the 1960s and restored to its 1860 appearance.  The old capitol is a National Historic Landmark.