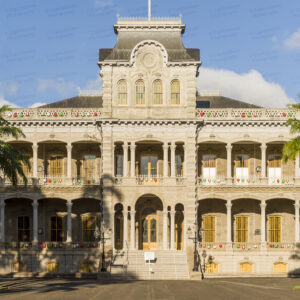 Scroll Down For All Iolani Palace Images

Capitolshots Photography’s collection of images of Iolani Palace, the first state capitol of Hawaii, in Honolulu.

Scroll to the bottom of the page for the gallery of Iolani Palace stock photos.  File names are visible at the beginning of the caption underneath each image after enlargement.

Designed by Thomas J. Baker, C.S. Wall, and Isaac Moore and completed in Honolulu in 1882, the Italianate structure was the only official state residence of royalty in the United States as the official residence of the last two monarchs of the Hawaiian Kingdom.

After the monarchy was overthrown in 1893, the building served as the capitol for the Provisional Government, Republic, Territory and State of Hawaii until the current capitol was completed.  Iolani Palace, which has been open to the public as a museum since 1978, is a National Historic Landmark.